This week I was listening to a conversation about cloud computing. Somebody mentioned that Google Cloud Computing network was better than  Amazon Web Services (AWS). I heard this before from people in conferences but nobody has ever giving me numbers probing this statement. I was thinking to myself this maybe a marketing campaign that somebody read in a SkyMall magazine or something like that.

At the end of the day AWS is years ahead of Google Cloud Platform (GCP); GCP was launched only in 2008 and AWS was launched 2002.

I started thinking how to test the GCP and AWS network to compare their network performance.  I used iperf3  https://iperf.fr/ to generate network traffic, test bandwidth and the amount of data transfer in a certain period of time.

For this we are going to use AWS t2.micro and GCP f1.micro. T2.micro is burst-able type instance. What this means is that work on CPU credits and after certain period of use you get less performance until the CPU credits are recharged. The captured is taking over 300 seconds or 5 minutes 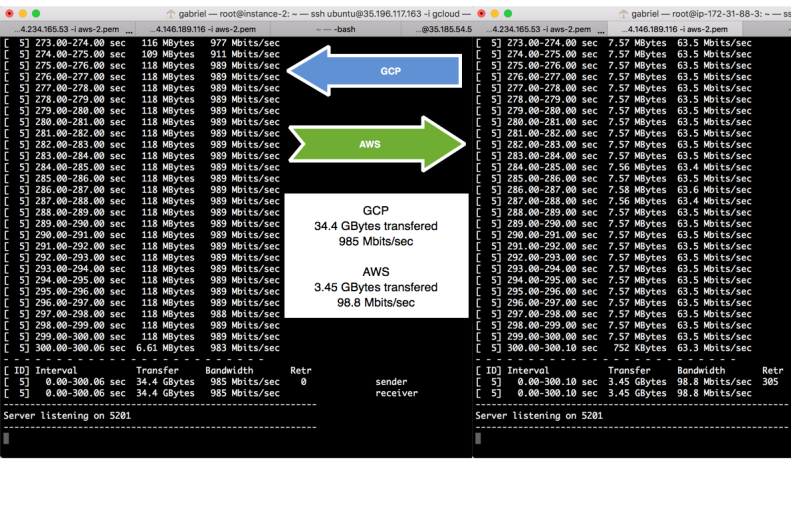 As you can see GCP computer f1.micro instance can transfer 10 times more information than an AWS t2.micro instance. Also the GCP rate data transfer is 10 times larger than AWS

For this test we are going to test AWS M3.medium and n1-standard-1. Both of  instances have 1 virtual CPU and 3.75Gb of memory

I wanted to do one more test to make sure the tests before were note a fluke. From AWS I selected m3.xlarge 4 virtual CPU and 15Gb of RAM. AWS state on its page that this instance type has a high network performance. 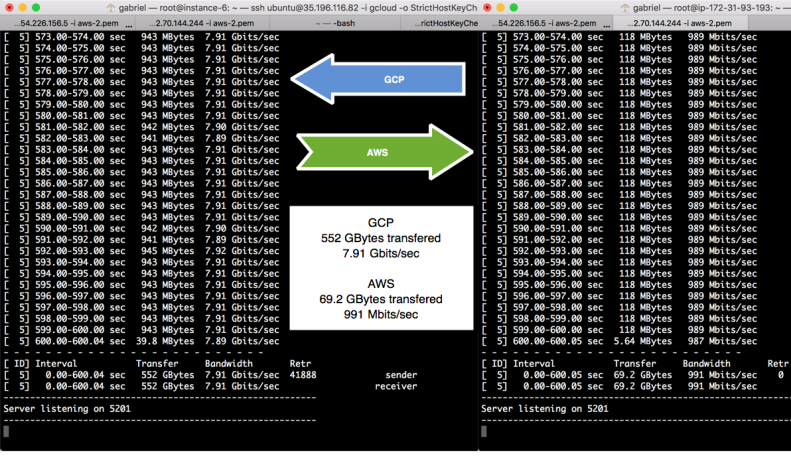 This AWS instance type was able to triple its available bandwidth from 300 Mbits/sec to 991 Mbits/sec. However, it could not get close to the GCP instance; GCP offered 7.91 Gbits/sec and was able to transfer 8 times more data than the AWS intance

If you only focus on instances and data transfer between the instances on the same region AWS does not even come close to GCP performance. This was only a small performance test between instances and not other services offer by the cloud providers.

Keep in mind GCP is still catching up to AWS on feature parity but would not be surprise if the gap is close within 3 to 5 years.

My name is Gabriel Rojas and my passion is Data Science and Automation. I have been adding tools to my belt for over 12 years. I feel blessed because I found my passion at a young age and have had great mentors throughout my life. Currently i am being focus on continuous delivery, continuous Integration,, infrastructure as a code, Data Engineering and Data Science What i love about my career that this profile is already history because there will be a new technology or new challenge that i will have embarked on. View all posts by Gabe